Oh, who am I kidding? This isn’t a book review. This is a book recommendation. Maybe even a gush. 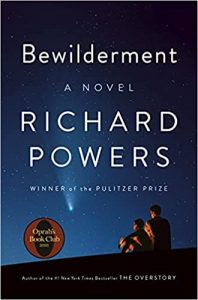 Hauntingly beautiful, Bewilderment by Richard Powers might be the best book I have ever read. I don’t think I have ever said that before.

There is so much here to love: exquisite descriptions of the natural world, science that bends the limits of our current knowledge, social issues to think about for days.

But the real power in this novel is the characters. I fell in love with them. Devoted father Theo. His uniquely beautiful son Robin. Even Aly, Theo’s late wife and Robin’s mother.

But mostly Robin. His wide open eyes and heart swallowed me. As Robin tells us, “Everybody’s inside everyone”, and these are characters who will live inside me for a long time, hopefully the rest of my life.

In an unstated, recognizable future, Robin paints watercolors of endangered animals to sell at the local farmer’s market for money to donate to environmental causes. And he struggles to survive third grade bullies. He reminds me of my own unusual child, a gift to the world as Robin is.

His father is an astrobiologist: chew on the meaning of those root words. Theo searches for life on other planets by (if I’ve understood it correctly, or at all) analyzing light that streams from faraway stars and comparing it to the light from the one planet we know for sure contains sentient life. As a scientist, he struggles to get funding for his dream project, The Seeker, an enormous mirror to be sent past the asteroid belt for a glimpse out of our solar system. As a single parent and grieving widower, he struggles to protect his son.

I can’t tell you much more without spoiling. But trust me, this is a book everyone should read. And hopefully a book everyone can enjoy. Though the topics are huge and soaring, and include a lot of science, the story is accessible and engaging. Skim the science if you want. Or wallow in it, setting aside the book to Google images of the specific endangered species Robin paints. It’s worth reading either way.

Somehow Powers marries the lofty ungraspable with the mundane universal. It’s like this passage says:

“They share a lot, astronomy and childhood. Both are voyages across huge distances. Both search for facts beyond their grasp. Both theorize wildly and let possibilities multiply without limits. Both are humbled every few weeks. Both operate out of ignorance. Both are mystified by time. Both are forever starting out.”

See what I mean? Totally accessible. But lots to think about it.

Of course, now I have a huge problem. What do I read next? It’s hard to imagine any book that won’t be a disappointment after Bewilderment.

I had never heard of Richard Powers before, but my safest bet is probably something from his backlist. I hopped onto Amazon and put his National Book Award-winning novel into my cart. Then I added his Pulitzer Prize-winning novel. Another title caught my attention. And a second. And a third.

I may have to just fill out his backlist. Time to order more bookshelves.

Unfortunately, my new books won’t arrive for a couple of days, and I can’t go two or three days without reading. So I’m off to my local bookstore to get the two of his books they have available.

I see a book giveaway in my future and yours, to let go of the duplicates. And of course, I’ll have to throw in a copy of Bewilderment too. Honestly, everybody should read this book.