Sorry to leave you hanging yesterday. I was kinda left hanging too.

Too nauseated to eat, I had peppermint tea and saltines for dinner last night. As I went to bed, I felt the congestion in my sinuses move into my lungs, and I just knew I had Covid. I took some mucinex to break it up and went to sleep, surprisingly calm.

First thing this morning, I did a home test in our bathroom to avoid exposing the children. It was negative. But I didn’t believe it because my lungs hurt, and my chest is tight. 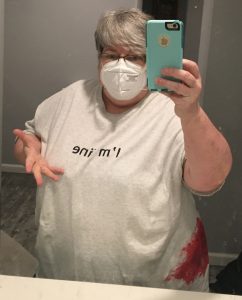 There have been reports of lots of false negatives on the home tests, so I wore an N95 mask as I fixed breakfast for Mars. The Urgent Care Clinic didn’t open until 10 a.m., so I did my regular co-writing session.

I was just walking out to go to the clinic when Girly Girl came downstairs, insisting I needed to test her since she was supposed to work this afternoon. She works with young children, so she is very conscientious about covid.

I was annoyed. I was already worried about getting back in time to take her to work, and the test takes fifteen minutes to process. But I knew it was important.

Plus, she’s the proverbial Immovable Object. We all know that if you’re not willing to be an Irresistible Force, don’t even bother getting into a power struggle with her. It was easier to do it her way.

When I swabbed her nose, I saw it was full of snot, so I handed her a tissue and told her to blow her nose while I finished her test.

The positive line came up within 45 seconds—before the control line was even a faint whisper. Girly Girl has Covid-19.

“You’ve got the virus,” I told her. “Go get dressed, and you can come with me to the doctor. But we’ll both have to wear masks even in the car.”

Her eyes got really big. “Am I going to die?”

“Absolutely not,” I said. “You have the best immune system of all of us. You’ll be fine. But if you’re worried about it, you can ask the doctor.”

At least the positive test meant I didn’t have to worry about how long it would take at the urgent care clinic. Silver linings, folks. Gotta grab ’em where you can.

I’ll summarize the doctor, spare you some of the pain. She gave me a PCR test, which we both expected to be positive. She didn’t bother to test Girly Girl. “I haven’t seen any positive home tests that were negative on the PCR test,” she said. She warned me it might take a few hours to get results because so many people were coming in for tests.

Girly Girl remembered to ask her question. “Am I going to die?”

The doctor assured her that she wasn’t. “People who are fully vaccinated and boosted aren’t getting very sick.”

Neither of us are sick enough to qualify for treatment, even though I’m in four high risks groups, and Down syndrome is a high group all on its own.

The treatments that work against omicron are in very short supply. The doctor Mars saw Wednesday said there were literally eight doses in Fairbanks of the monoclonal antibodies that are effective. “We’re getting another thirty-five tomorrow, but that’s for the entire state.”

My doctor said, “Pretty much the only people who are getting them are patients who’ve had an organ transplant.” Yet another reason to avoid getting it in the first place if at all possible!

I came home in a bit of a daze. The Gamer (formerly known as Mad Scientist and The Animator) is still testing negative, so Mars and I had a masked, socially super-distant conversation about how to handle the logistics, based on all the possible scenarios.

It took seven hours to get my results, but the PCR test says I’m negative. Unlike Mars and Girly Girl, I do not have Covid. Thank God. Though I certainly have something respiratory.

Mars remains sequestered in the guest room, and the main bathroom upstairs has been designated for his use only. Girly Girl is isolating in her bedroom. She and The Gamer share a Jack-and-Jill bathroom that The Gamer has been banned from using.

Funny…I thought the four bathrooms in this house were overkill, but I am so grateful for them. Because Mars and GG each have a dedicated bathroom, they don’t have to walk through the halls that The Gamer and I use.

I am so grateful for our overkill number of bathrooms—and very much aware that having space at home to isolate is a class privilege.