Covid in the House

I’ve been writing a blog post about Covid in my head for about a week. I wanted to tell you about the numbers I’m hearing, about how the symptoms have changed, about who is getting sick (spoiler alert: everybody).

The numbers are startling, rising exponentially, but you probably know that by now. More startling is what those numbers mean. Though the percentage of people infected with omicron who have to be hospitalized is considerably fewer than with Delta, omicron is so prevalent that the actual numbers hospitalized are higher and rising. Fifty-three percent higher than they were two weeks ago. And hospitals were already struggling.

The symptoms are startling too. People aren’t necessarily losing their sense of smell or taste anymore, so it’s much harder to recognize early enough to prevent spread, especially since Omicron is sooooo contagious. And it can start with unusual symptoms like a sore throat, headache or upset stomach. And people can test negative day after day, then suddenly test positive, so one negative test is meaningless. 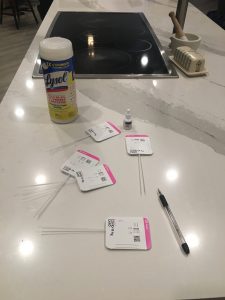 We are all fully vaxxed and boosted, so statistically, it should be a mild case. Statistically.

And so far, it is. Mars has a runny nose, a dry cough, a sore throat. He’s an optimist (a foolish optimist if you ask doom-and-gloom me), and he’s pretty sure he’s over the worst of it.

The kids and I all tested negative, and we don’t have any symptoms. So Mars is sequestered in the guest room, as I was in April and October of 2020. We are grateful for those two dry runs, so we had a chance to figure out how to isolate without bringing our family life to a standstill.

See that sentence I just typed? I started to say “dead stop” instead of “standstill”, but I couldn’t continue for superstitious reasons.

Thing is, I keep thinking about those numbers. I’m a member of four different high risk groups, one of which is crappy lungs. I was diagnosed once with chronic bronchitis, which is on the COPD spectrum, though very, very far on the mild side. But that makes it terrifying to have Covid-19 in my home.

I don’t think I actually have chronic bronchitis, mind you. I’m prone to respiratory illness, and when I lived in damp, cool western Washington, I pretty much coughed all winter. So I understand why the doctor called it that. But it disappeared when I moved to a very cold and dry climate (Alberta and now Fairbanks, Alaska), so I don’t think I have COPD. But I do have crappy lungs. Either way, it’s scary.

On the other hand, I haven’t been completely obsessive about it. We visited a couple in their home, unmasked, just after New Year’s. We had dinner with a small family in their home a week or so ago. And a couple of days ago, I met a friend for tea (which we drank sitting in her truck). In each of those cases, we were all fully vaxxed and boosted, and social distanced. Reasonable risks.

I expect it to be no big deal for Mars, and I’m hoping the kids and I don’t get it at all. But I also know it could blow up on us, so when I felt a little nauseated before dinner, I looked it up. And yes, while nausea isn’t usually the first symptom, it can be.

The CDC has a great tool called a self-checker. It does ask a lot of nosy questions (like what sex you identify with and what race you are), but you can choose not to answer most of them.

I plugged in my information and got this, “Call your medical provider, clinician advice line, or telemedicine provider as soon as possible. You also have medical conditions that may put you at risk of becoming more seriously ill.”

Sigh. I tested negative yesterday and this morning. I’ll test all three of us again tomorrow