The Year of Covid hasn’t been a disaster for me.

I do realize this is my privilege speaking. We weren’t in danger of losing our income, and I was free to sequester at home for the year (I’m in four different high risk groups, and I kinda wanted to survive). And although we were four adults hunkered together in a home, it’s a big enough house for each of us to have our private space.

So, yeah. I’m privileged. I did what I could to try to help limit the damage for others, but it’s never enough. Especially in Fairbanks. We have a large and visible population of homeless people, and my resources are not enough to fix the problem. But I did try to help as I could.

My family fell into a pattern of using our public spaces at different times. Our two adult children stayed up all night and slept in the day time, and Mars and I kept more traditional hours. We all ate dinner together most nights, which was very nice.

But the consistent thread of the year—the thing that made 2020 one of my best years—came from a surprising place. 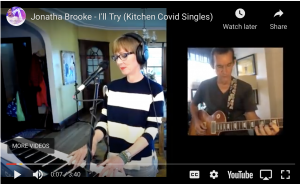 I love (love love LOVE!!!—please insert silly puffy glitter unicorn hearts here) the independent singer-songwriter Jonatha Brooke. Her music speaks to me. In fact, soon after I found her, Mars and I both spent an entire summer listening to nothing but Jonatha Brooke.

At some point, I followed her Facebook Page, so when she started doing weekly concerts from her kitchen via Facebook Live, I was sooo there! I missed the first Kitchen Covid Concert, maybe the first two, but I watched all the others live for more than a year (with one exception toward the end when I had to take one of my children to the doctor and had to watch the recording later).

It didn’t feel like a life-changing choice at first. In fact, not for several months.

I spent many weeks rediscovering how much I love doing jigsaw puzzles. Unfortunately, I’d finish the thousand-piece puzzles in a day or two, so I moved to two thousand and then three thousand pieces. That three-thousand-piece one took a couple of weeks. And it was enormous! Bigger than the table I was using, so I had to commandeer the dining table for a while.

Jigsaw puzzles are fun, but it didn’t feel productive. What I wanted to do was write, write fiction, but I was scared. The past ten years or so have been extremely stressful and painful for me, and I stopped writing at some point. To start up again in my 59th year seemed ridiculously optimistic.

Then Jonatha announced a songwriting workshop. A couple of years ago, I took a music theory class in Port Angeles from the inimitable David P. Jones. We had to compose a few pieces of original music for the class, and it whetted my appetite. I don’t see myself becoming a composer or singer-songwriter, but it was definitely fun dabbling in a completely different creative medium.

So I took Jonatha’s class. It was mind-bending. Storytelling in a completely new way. I started taking notes for songs and practicing the guitar. SO. MUCH. FUN!

In August, though, I happened to find notes for a novel idea I’d written four or five years ago. It started as a late night, alcohol-fueled Facebook conversation with a friend whose been my muse more than once. I don’t remember how the conversation started, but we were tossing what-ifs back and forth, and at some point, one of us said, “Wow! This would make a great novel!” So I wrote up the notes, tucked them into a digital folder, and promptly forgot about them.

Fast forward to August 2020: I skimmed the notes and felt the hair on the back of my neck prickle. The story was a dystopian novel based on the increasing polarization between political factions in the US, and my notes were downright prescient, right down to the pandemic.

That’s what I started writing again. I finished the first draft of The Truthspeakers in January. I set it aside to cure and started outlining a memoir. By April 1, when I picked the novel up again, I had the memoir outlined and the first draft about seventy-five percent written.

I have developed some strong work skills, and I find myself getting up every day, eager to start working. I’m excited about both of my current projects and believe each has the potential to make a big splash in the publishing world.

And none of this would have happened if Jonatha Brooke hadn’t shared her heart, her creativity, and her inspiration. She shone a light on my path during a very dark year, and looking back, all I can see is the brightness.