I woke this morning from a very disturbing dream. My husband said I looked haunted when I came downstairs for a cup of tea. 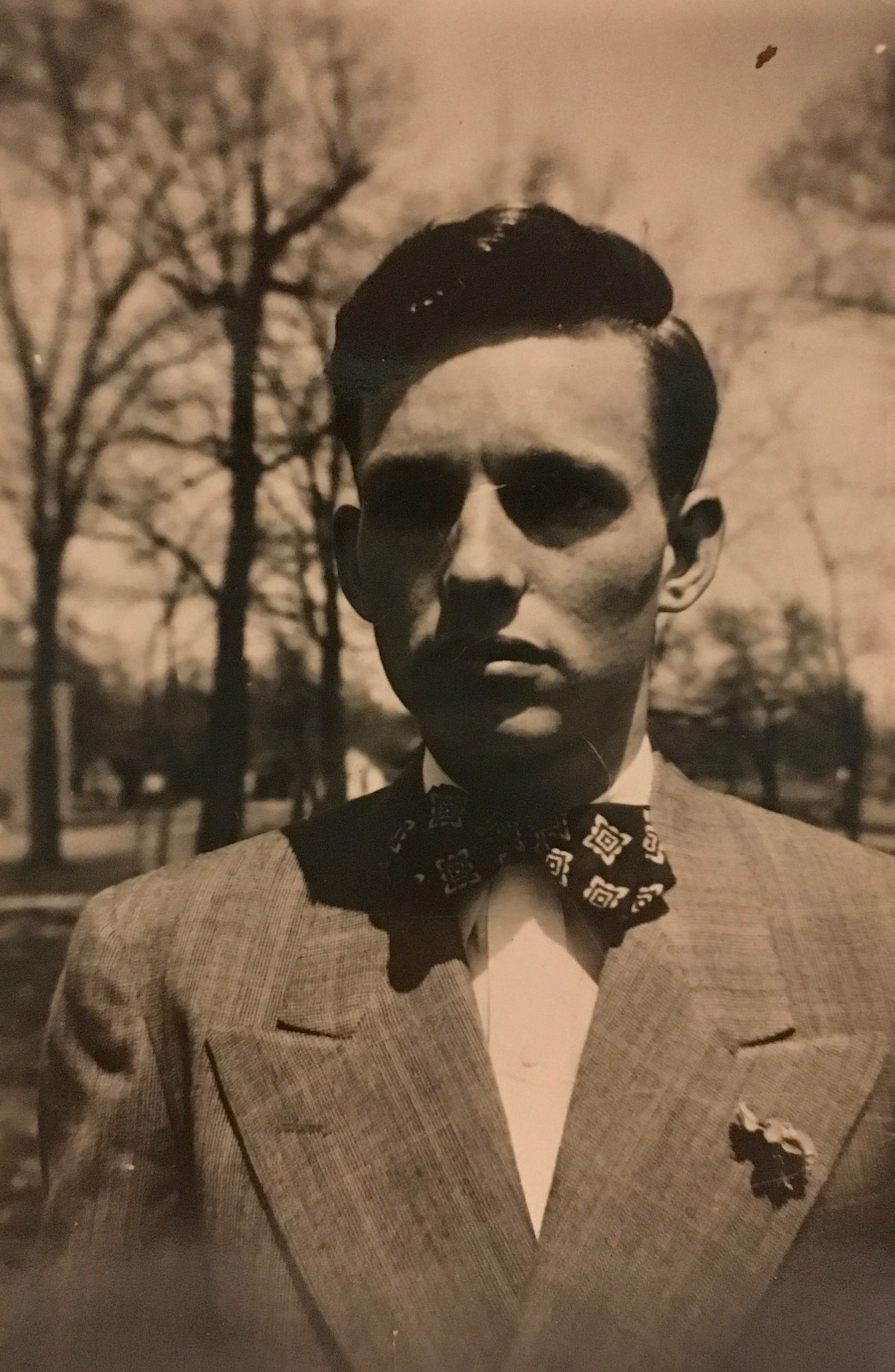 First, I need to explain (since I apparently never blogged about it, though I have a distinct memory of doing so) that my father died a year ago December 9. Ours was neither an easy relationship nor a close one, but that doesn’t keep the relationship from having a huge impact on me. He was my father, after all.

At my mother’s request, I wrote the obituary. Sadly, the persons in charge of purse strings (not me) decided it wasn’t worth the cost of publishing in the newspaper, so it was never posted except on the funeral home’s site. Someday, when I have a computer with memory to spare, I’ll post an updated version here with lots of pictures.

December 9 of this year, I was very much aware of the date. And yesterday I got a Christmas card from my mother with a collage of a few great pictures of her and my father. On the back, she’d attached a sticky that said, “Last year card that didn’t get sent.” It was odd and painful to see his face again.

No doubt that’s what prompted my dream.

But in my dream, I was attending his funeral. The kind of funeral I would have expected as a child for him to have. Lots of music. A speaker. All of it basically calling sinners like me to the altar to repent or burn forever in hell.

Those are not the kind of services I attend these days. My church is very liberal and far from fundamentalism. Nonetheless, I had a bad experience a few years ago.

Not long after we moved back to the States (Autumn 2016), we went for the first time to our denomination’s local church. We fully expected to join that congregation.

The preacher spoke that morning on forgiveness. He gave himself as an example of how to be Christlike (never a good idea, IMO). He told how he and his brother had differed over politics, and it threatened to destroy their relationship. But he eventually broke the ice and “forgave” his brother (for having a different opinion? not sure).

It hit me hard. Less than a year before that (December 2015), my father had thrown me out of their house because I dared gather the family to discuss how to support the parents so they could remain in their own home despite the facts that both were slipping into dementia, Dad was falling repeatedly and couldn’t get up unassisted, and Mom had leukemia.

I had gone to visit them earlier that summer (2015), thinking I’d stay for a month and deep clean their house. But they needed so much more help than I ever dreamed. Ultimately I spent six months there, taking care of them. Sorting out their meds, getting blood sugar under control, getting Dad’s cataracts fixed, etc. So I KNEW how badly they needed help.

Unfortunately a faction of the family apparently decided I was just trying to get money from Dad, or something, and convinced him he couldn’t trust me. So he threw me out in an ugly and public way. I left assuming I’d never see him again. And at the time I visited that church, I hadn’t and still didn’t expect to ever see him again.

Of course it’s much more complicated than that one event. I disappointed him the moment I was born with a split instead of a stick (my first midwife’s language), and I was never allowed to forget it. He was an absent father for the most part, and when it wasn’t absent, he was often cruel.

Yeah. I am broken as a result of being his daughter. That’s a lot to forgive. Plus, what does forgiveness even look like? To me, it doesn’t mean I have to continue allowing him to mistreat me.

That day in late 2016, sitting in the local church listening to that pastor preach about forgiveness, it was clear that the pastor’s view of forgiveness aligns with that of my fundamentalist, misogynistic, possibly abusive relatives who say forgiveness means turning the other cheek and letting your batterer punch you on the left side of the face after he’s broken the right side of your jaw.

Many years ago, I realized that Dad’s cruelty came from his own brokenness, and I long ago forgave him for it. Him throwing me out of his house was a bit too raw at that point though. It had been less than a year, and it still hurt like hell.

Who am I kidding? It’s been five years now, he’s been dead for a year, and it still hurts like hell.

I have a glass face, and that pastor saw that his sermon was getting to me. No doubt he thought I was feeling convicted over guilt (though actually I was feeling grief from the loss of my father). What those kinds of men do when they think they perceive guilt is to press on the sore spot until the person breaks. Apparently that’s supposed to bring salvation. Everybody shout amen.

The pastor used one of those little mics you pin to your clothing, and he wandered the dais as he spoke. When he was saw that I was upset, he left the dais and came to stand directly in front of me.

You have to appreciate, we were sitting in the second row (that’s always Girly Girl’s choice). So the pastor was literally close enough I could have grabbed his shirt front. Or his mic. And I totally should have.

For the rest of the service, he remained glued in his spot, smack in front of my chair, directing every word of the rest of his sermon right at my face, never looking away. It was humiliating. I felt branded by a big red S for “sinner”, though this man had never met me and knew zero about my life.

The moment the service ended, we ducked out a side door to avoid having to shake the bastard’s hand, and of course we never went back. A year or so later, I learned the pastor had retired and left, but there was no way I was going to join a congregation that experienced my humiliation.

Branded with a big red S. That’s exactly how I felt in my dream. That every singer at Dad’s funeral, the person giving the sermon, and the person giving the eulogy were all standing less than a foot in front of my face, staring eye to eye, and announcing to everyone in the room that *I* am a worthless person without hope for salvation.

My beloved father-in-law died sixteen years ago. And several times he’s come to visit me in my dreams. Always very sweetly. The last time, he told me he was busy but very proud of me, hugged me, and left. These have never felt like dreams. They feel like visits, and I am infinitely grateful for them.

I have often wondered, especially in the year since Dad died, whether my father would also come to visit me in my dreams. I doubted it — he rarely thought about me at all, as far as I know, much less made any effort on my behalf. Nor was I at all sure what he might say, much less that I wanted to hear it. But I wondered.

All I can say now is that if my dream last night was a visit from my father, NO THANK YOU! You just go right back to wherever you ended up and leave me the hell alone.