I discovered a new blog today: Bedlam Farm. Initially, I clicked onto a specific article (The Cuomo Brothrs Versus The President), but then I started reading the archives, and … well, suffice to say, I have a new favorite blog.

I was delighted to find it. I’ve missed reading blogs. Facebook just isn’t the same.

It struck me that I might not be alone in this, especially since we’re all hunkered down at home, so maybe I should write in mine again.

Or maybe I am all alone in this, and nobody else is reading blogs any more, but that’s OK. I was always writing mostly for myself.

As Flannery O’Connor said, “I write because I don’t know what I think until I read what I say.”

So … here I am, whispering my thoughts to the ether, so I know what I think.

We have been self-isolating for almost a month. Since March 9, I can count the number of times I’ve been within six feet of someone I don’t live with: one, two.

I find it difficult to focus on work though. And spring cleaning when we still have three feet of snow outside just doesn’t yank my chain. So I have been cooking. Furiously.

I started with soups. I had chosen several soup recipes I wanted to bring to our church’s Lenten Soup Supper. When the suppers were canceled, I made them for the family. 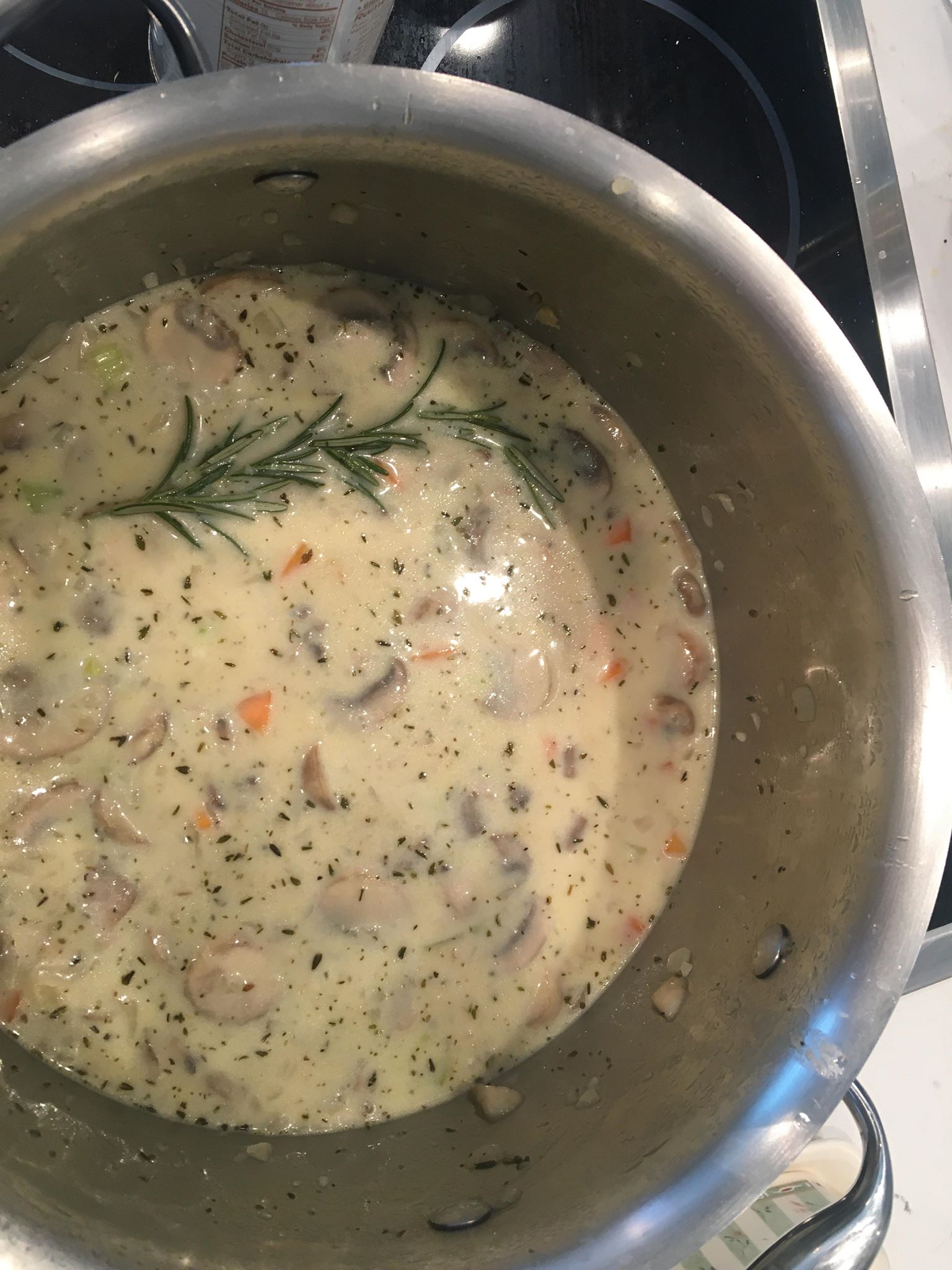 First was a Creamy Cauliflower and Bacon soup (but we added cream and grated cheese). I figured it would be good—Ginny hasn’t let me down yet—but I was astonished how good it was. Even my picky eaters snarfed it down.

Next, I made a Creamy Reuben Soup from the leftover corned beef from St. Paddy’s Day. O.M.G. This soup was, if possible, even better. Next March, I’m buying at least three corned beefs: one for March 17, and two for soup later.

Then I made Creamy Chicken and Mushroom Soup, one of my father’s favorites (pictured). All were big hits with the family.

Since it was March, and I was thinking about all things Irish, I tried Chef John’s Irish Pork Stew.

Since COVID, our grocery stores are often cleaned out by noon of certain things, but they feel fairly random. It’s often toilet paper, and antiseptic wipes haven’t been seen in a month. But otherwise, it’s pretty random. Somedays the produce is totally picked over, but there’s plenty of meat. Then the next time, there’s no red meat, but lots of seafood. You just never know what you’re going to find.

Mars was unable to find the pork shoulder for my Irish Stew. So ours turned into Alaskan Irish Stew, made with moose meat and bacon (pictured).

Funny story about that shopping trip: Mars was standing in the craft brew aisle looking for Guinness when a woman in the aisle said, “Excuse me. Do you know anything about beer?”

He was a bit nonplussed. I mean, “Sure! I know a heck of a lot about what happens if you drink too much of it”  might be an appropriate response, but … awkward!

She must have seen his discomfort because she quickly added, “I want to try this recipe for Irish stew, and it calls for Guinness. But they only have six-packs.”

Mars laughed. That’s exactly what he was doing: trying to figure out which beer to get to avoid buying six bottles of Guinness when he only needed one.

They settled on a dark stout from Alaskan Brewing Company, and that was THE best stew I have ever had. Ever. Anywhere, even Ireland.

Didn’t hurt that I served it with colcannon and Irish soda bread.

After the soups and stews I moved on to things like Fall-Apart Pressure Cooker Pot Roast and Loaded Grilled Cauliflower. Yum, yum, YUM!! The cauliflower, especially, reminded me of my mother’s amazing fried cauliflower except without all the carby breading.

Next up is Rib-Eye steak with Roasted Brussels Salad.

Our kids*—now 18 and 22, and very much independent—are picky eaters. And Mars and I eat low-carb, which they don’t care for. Before COVID, they turned their noses down at our meals, unless it was a meal specifically for them (e.g. spaghetti where we ate spaghetti squash and they ate pasta). They prefer frozen food units (TV dinners) or frozen pizza or corn dogs. You know: young adult food.

We don’t push it. We want them to be independent, so it’s always their choice whether to eat what we prepare or to make their own food.

But at some point this month, a funny thing started to happen. The kids started wandering downstairs about 5 p.m. to ask what was for dinner.

Somehow, in this crisis, with all of us trapped at home, we have started eating family meals together. And expecting to eat dinner together. And (dare I say?) enjoying it.

Even weirder: we’ve stopped bringing our electronic devices to the table. Nobody ever said anything. We just … stopped. Now we sit around the table and talk.

I look forward to going back to normal. I miss the gym and playing Pokemon. And our kids were in the process of getting jobs, definitely something I want!

But I’m thinking now I might want to keep some of the best parts of self-isolating if possible. Like family dinners together.

*We really need a word for “adult offspring” that doesn’t imply “child”. My children, my kids, are not kids anymore!