Life in the Frozen North

There is no way to transition to this if you don’t already know, so I’ll just announce it: Mars and I (with The Animator and Girly Girl) have moved to Fairbanks, Alaska. 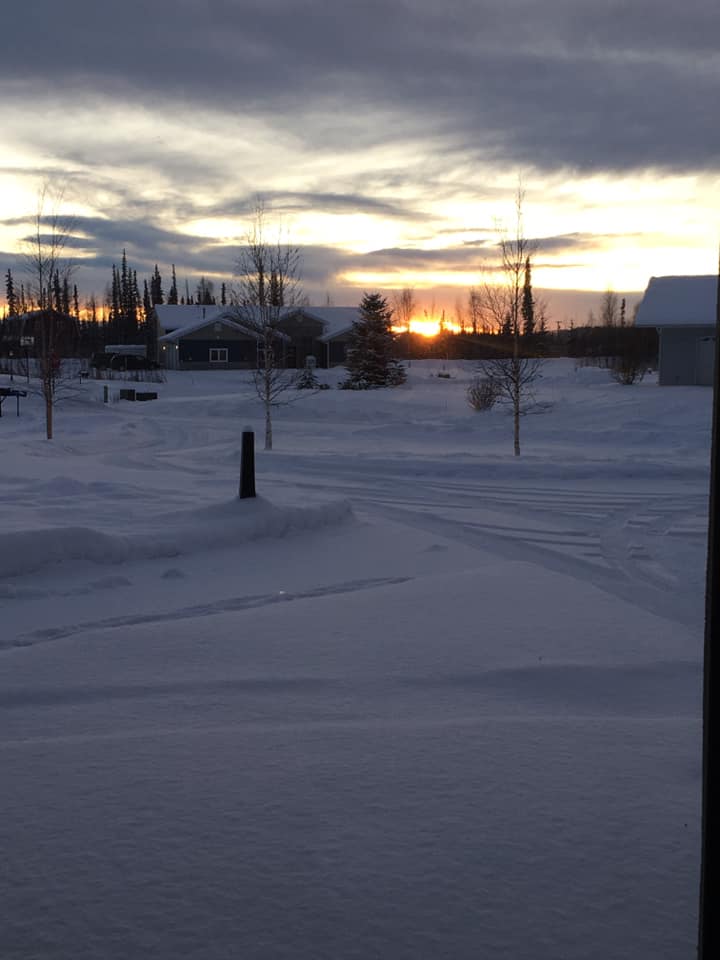 Mars was recruited by a company that made an offer we just couldn’t refuse. I couldn’t announce it for a long time because the company hadn’t yet announced it, and by then we were scrambling to pack and move … and then do it all in reverse in the new house.

We’ve been here a couple of months now, and at least so far, we all love it. The open space, the wildness, the blue light, the wildly original people … even the snow and darkness. This feels like home in a way no place has since Chehalis.

But that isn’t this story. This story is about my dangerous trek into the deep snow that could’ve ended disastrously.

I was just like that character in Jack London’s short story, “To Build a Fire.” I had everything under control. I was aware of the risk, but also confident in my abilities. After all, our little family built a snow shelter and slept in it during Calgary’s worst blizzard in fifty years. I totally had this.

But just like London’s character, one tiny lapse in judgment, and suddenly the situation was dire.

London’s character’s lapse in judgment was building his fire under the snow-laden, overhanging branches of a tree. My lapse was trusting snow that wasn’t trustworthy.

We live in a tight-knit neighborhood of wonderful people, and apparently decorating the exterior of their homes is a thing for holidays. That’s not something we’ve ever done, but in the spirit of neighborliness, we bought a few strings of lights and box of ornaments.

Mars wrapped our front columns with lights, and put another set on a little evergreen in the middle of our front yard. When he was done, I picked up the ornaments and headed out to hang them.

I stopped at the edge of our driveway. We have about a foot and a half of accumulated snow, and while Mars has kept the driveway blown clear, the path to the little tree was broken only by his footsteps.

“I tried to stomp it down for you,” he said.

It looked fairly treacherous, and terrifying to me. In February, Sequim had a freak ice storm, and I slipped on the ice, both breaking and dislocating my shoulder.

Recovery was difficult. I was in a shoulder immobilizer for six weeks or so, which made my right arm and hand (my dominant hand!) pretty much useless. It’s astonishing how many every day tasks require two hands.

I still don’t have my full range of movement nor strength back. So I’m rather timid about situations where I might fall.

Mars must have been my trepidation. “Worst thing that can happen is that you’ll fall into soft snow,” he said. “You can’t get hurt.”

I couldn’t move. I could not make myself step into those packed footprints.

But we’ve been married long enough for him to know to pick his battles. “I’ll get the snow blower and clear you a path,” he said, and left.

I stood staring staring at his boot-shaped holes in the snow. It’ll be fine, I told myself. I reminded myself about our adventure with the snow cave and how I learned to trust snow. I can do this.

I took one timid step into the first boot-hole. Nothing bad happened.

I took a second step. This time the snow under my boot collapsed a little, but I was fine. Emboldened, I took another step, taking care to stamp it down a little first. No problem.

Then disaster struck, just like with London’s poor character. In London’s story, the snow on the overhanging bough melts and drops onto his fledgling fire, dousing it completely. Suddenly he is fighting for his life.

In my story, the snow collapsed under my boot, and next thing I knew, I was lying face down in the snow.

“Glurg,” I said, but nobody answered.

I lay there for a few minutes. After all, how long could it take for Mars to walk to the house and return with the snow blower? He could help me up.

But he didn’t return. Snow seeped past my gloves and packed around my wrists. Where my breath hit the snow, it melted and then froze into a thin shell. I started to shiver, but he still didn’t return.

I wasn’t going to just lay there and die there, no more than London’s character was! I was going to try everything I could think of to save myself from becoming a popsicle.

First I tried to push myself up with my arms, but the darn snow was just so soft! The snow we dug a snow cave into was solid and substantial and held weight with no problem. But this stuff? Gentle and downy, just like pillows of softness. But cold. Very cold soft pillows.

Each time, I ended up with an arm completely extended below me in the snow, waving vacantly through the snow toward the hard ground just tantalizing out of reach.

By this point, my face was getting pretty cold, and just like London’s character, I started to worry about frostbite.

I rolled to one side, to get my face out of the snow. Picture a beached whale flopping around on white sand except this whale is wearing a black suede jacket and sweats.

Under me, the snow collapsed to my exact shape. It was soft and cushiony. Surprisingly comfortable. Well, except for the part about worrying that I might freeze to death in the cold, trackless wilderness.

Where was Mars?! I looked toward the house. It was looming and silent, a fortress against intruders like me. Nothing moved.

“Mars?” I called in a soft whisper. Yes, I desperately needed to be rescued from a bitter, cold death, but I sure didn’t want to be caught by the neighbors, lying helpless in my own front yard.

He didn’t answer. I waited several minutes, but rolling around had pushed the snow past the hem of my jacket. It was packed around the waistband of my sweats, and I was getting cold.

But just like London’s character, I always had a Plan B. Or I could think of one anyway. There was always something I could try to save myself.

I needed my phone. Last time I remembered having it, it was in my left front jacket pocket, but that’s the side I was lying on. I rolled over to the other side, packing more snow against my belly, and felt around. The pocket was empty.

Rolling around, however, had built up a shelf of relatively stable ice under me. Maybe it was enough to push myself up from. I rolled back and forth several more times, until the snow stopped collapsing. Then I rolled onto my hands and knees and tried to push off the packed snow.

No use. If it didn’t collapse under me, I just slid around on it. And remember what I said about my range of motion and strength? Yeah. I just didn’t have the strength to push myself off the snow.

I lay back and tears started to gather in my eyes. Do tears freeze? I do not know, and I didn’t want to find out.

Where was my husband? Really, what use is it to have a man with a really cute butt if he’s not there to lift you from the snow???

I seriously considered just rolling myself sideways until I rolled onto the snow-plowed driveway, where I could push myself up. But knowing my luck, the Fedex truck would drive in right as I lay there, catching my breath, camouflaged by the black coat against the asphalt.

And I didn’t have any other ideas.

That was when it struck me: didn’t that character in “To Build a Fire” die?! Clearly my situation was dire.

I had given up hope when I heard the garage door rolling up.

Nothing. Not a single response, and I didn’t dare risk shouting louder. Heck, freezing to death clutching a box of ornaments hangers is infinitely preferably to being discovered by the neighbors lying in the snow calling for rescue.

But of course I didn’t freeze to death. Mars eventually noticed I was lying in the snow. It wasn’t easy, and it took several tries, but eventually he had me standing again. I stumbled back to the safe, solid ground clinging to his arms.

By then it was dark though, so the ornaments will have to wait until tomorrow.

I took off my sodden coat, boots, and sweats in the garage and left them to dry. Then I went inside with a thankful prayer that unlike the poor character in Jack London’s story, I had survived my treacherous venture alone through deep snow into the wilderness.

OK, fine. The deep snow was barely up to my knees. And it was my own front yard.

But still! It could’ve been dangerous. I could have frozen to death out there.

OK, fine. It would’ve take a while, maybe a week or so (it was only twenty-five or so Fahrenheit).

But it could’ve happened.