My Adventure with Snow

I woke up to a winter wonderland. We’d had snow before today, but we got quite a bit of it overnight, and it was still snowing when I got up. Here’s what it looked like: 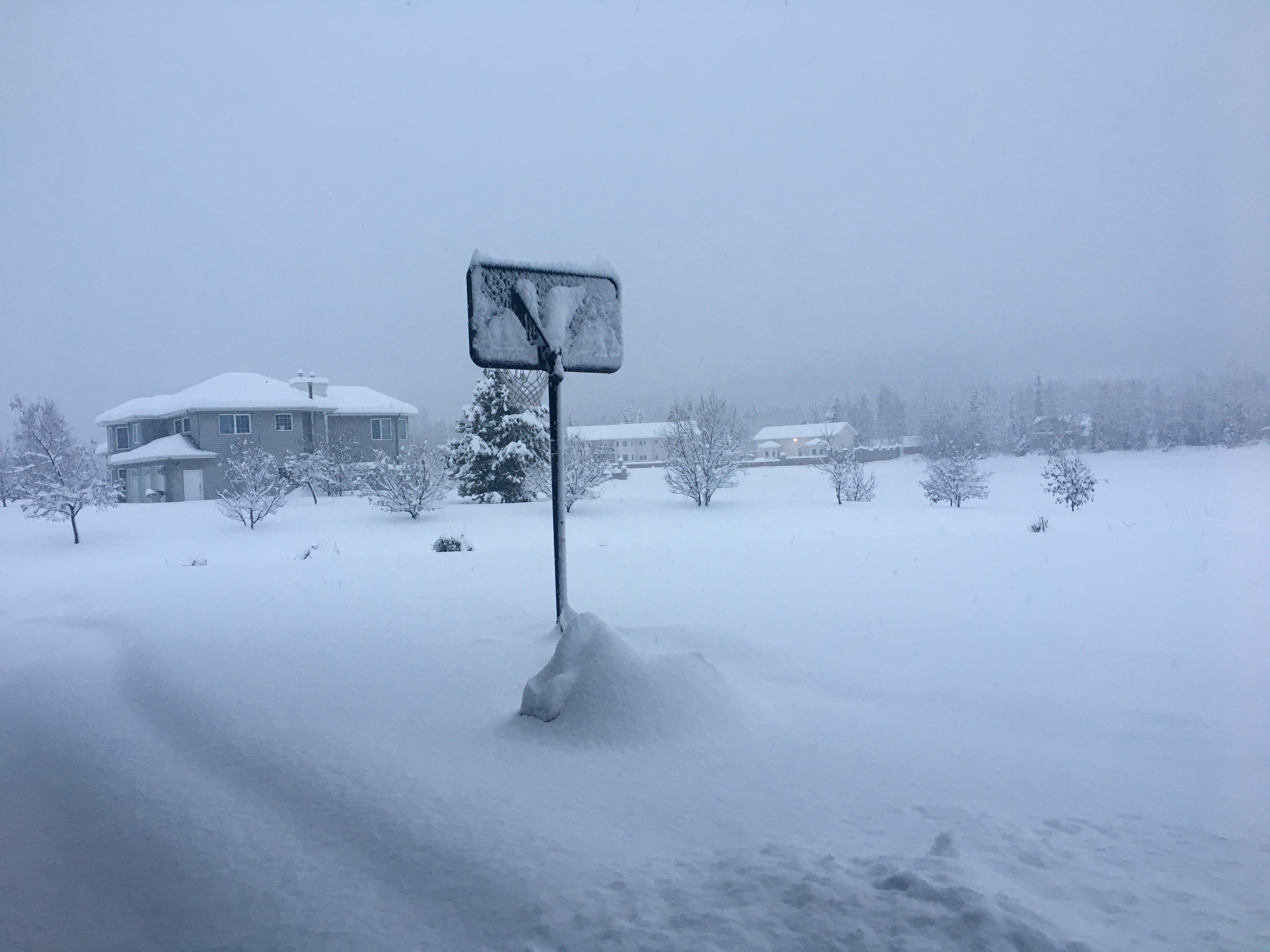 Gorgeous, no? And we were expecting ten inches today. I love it when it snows like this. It makes the house super cozy and snug.

Only one problem: the dog had an appointment with the vet.

The Fairbanks Facebook group said the roads were brutal and hadn’t been plowed, so I seriously debated canceling. But we’d been waiting for several weeks for this appointment, and I’ve been worried that she has arthritis and is in pain. So I didn’t cancel, but I left the option open.

At noon, Mars and I discussed it. Quite a bit of snow had fallen. Here’s a picture of my waist high salad garden bed, so you can see the accumulation. It’s a lot of snow!

But we were both sure at least the main roads would have been plowed, and my Subaru has nice high clearance and killer snow tires.

So off I headed with the dog. I knew it was going to be a challenge the moment I opened the garage door. One of our sweet neighbors had plowed a swath through our circle driveway, but it left a berm at the edge of the plowed area that was deeper than the accumulation. I knew I’d have to just get up enough speed, in reverse, to break through the berm.

But the only real risk was getting stuck. There’s nothing to hit in our front yard. So I put the car in reverse and gunned it.

It worked. Once I was onto the plowed part of the drive, I put the car in gear … and realized there was another berm to burst through where the street had been plowed. And I’d have to make a right-angel turn the moment I burst through to stay on our somewhat narrow road.

I trust my car and my driving skills, so again, I gave the car gas and hit the berm. Two things happened: First, snow came flying up over my hood, and suddenly I had zero visibility. Second, I was fishtailing. I drove by braille (as Mars says), and almost immediately straightened out on the road. So I kept going.

At the stop sign, there was another berm to plow through, but I could see no one was coming, so I didn’t even slow down, just plowed through the snow. I had to do it again when I got to the highway.

But … thank God and the snow removal crews … the highway had been plowed. I drove about ten miles an hour under the speed limit with my defroster and wipers going and chose the lane that was most clear. Twice I had to stear around vehicles stuck in the lane (the annual meeting of the Summer Tires Club), and I saw another couple of vehicles in the ditch. But I felt confident.

Then I got to the big highway, and hit a whiteout. I literally could see nothing. Not my lane, not the edge of the road, not even the truck that I knew was a few car-lengths in front of me and had his running lights on. About then, he hit his brakes (probably because he couldn’t see either). The brake lights I could see, and sure enough, he was right where I thought he was. I slowed down, tapping my brakes so the car behind me could see me.

Once some distance had built between me and car in front of me, I had a little visibility — just enough to see that the “fast lane” was more clear than my lane. So I moved over and crept along, going at least fifteen miles under the speed limit. At the next entrance ramp, a string of trucks merged into the slow lane, and immediately I could no longer see.

Again, I tapped my brakes and let a gap build between me and all the other vehicles. And crept along, though visibility was very bad. When I reached my exit, it was difficult to see exactly where the turn was. White on white makes lanes invisible and even curbs disappear. I lined up with the stop light and made the turn, though I had to guess where my lane was. The new street had not been plowed, and a car was stuck in the righthand lane. I crept past it through the deep snow and arrived at the vets.

The dog is fine. We were afraid she had diabetes because she’s been drinking more, but she’s fine. In fact, unbelievably healthy for a purebred dachshund her age. It was a very pleasant visit.

However, while I was at the vet, I got a weather alert on my phone. A “winter storm warming” that said we had already gotten ten inches of snow! And another sixteen are expected  before the snow ends tomorrow. Uh oh.

As my car warmed at the vet’s office, I did the visualization exercise I learned from my Lynn (I’ll link to her website tomorrow), where I draw a bubble of psychic safety. Then I pulled out of the parking lot. About half a block away, there was a vehicle stuck at the stop sign. I had to wait until I could see there was no oncoming traffic, so I could safely move into the oncoming lane to pass. And when I made the first turn, on the unplowed street, my car slid back and forth for half a block.

It was interesting to realize I was comfortable with that. As Mars and I often joke, you can always steer even when you cannot stop. I’ve become comfortable with steering a vehicle that is sliding around.

The rest of the drive home was mostly uneventful, primarily because there were very few cars on the road, so visibility was better. Again, I saw five or six vehicles off the road or stuck, but I made it home.

Well, most of the way home. I knew I would have to gun it to break through the berm again, and I couldn’t gun it until after I’d made the turn from the road onto the driveway.

But I had done it coming out, so … no problem, right? All I had to do was stay in the tracks I’d made coming out. 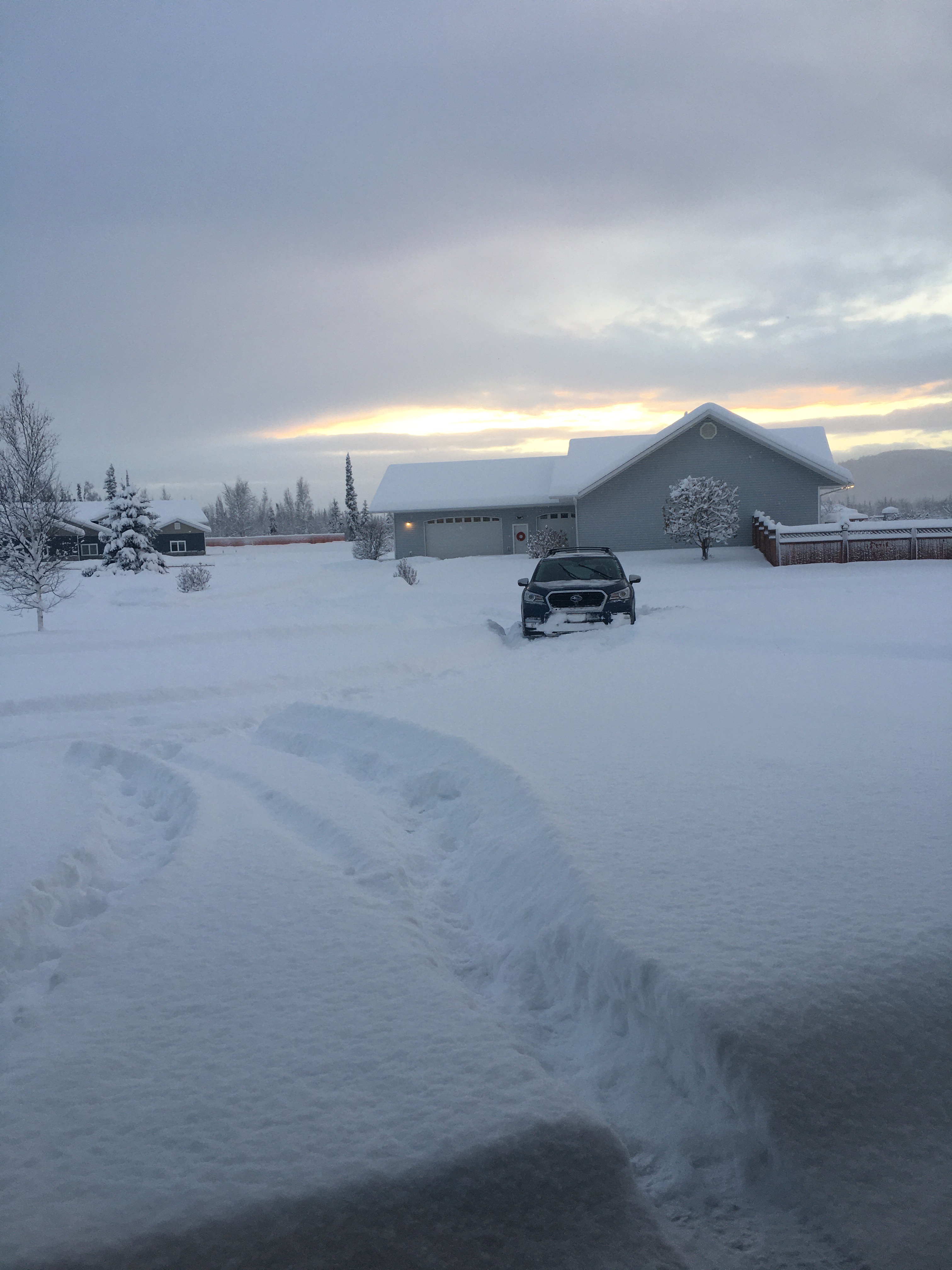 I almost made it. The car was probably a hundred feet shy of the garage when it stuck tight. When I stepped out, the snow was well above my knees.

But yanno? I was home, and nobody got hurt, and I was on the driveway, not the road, so I didn’t need to worry about the next driver plowing into me. I grabbed the dog and stomped my way to the house.

Poor Mars, though! He had to clear the snow from the driveway first. 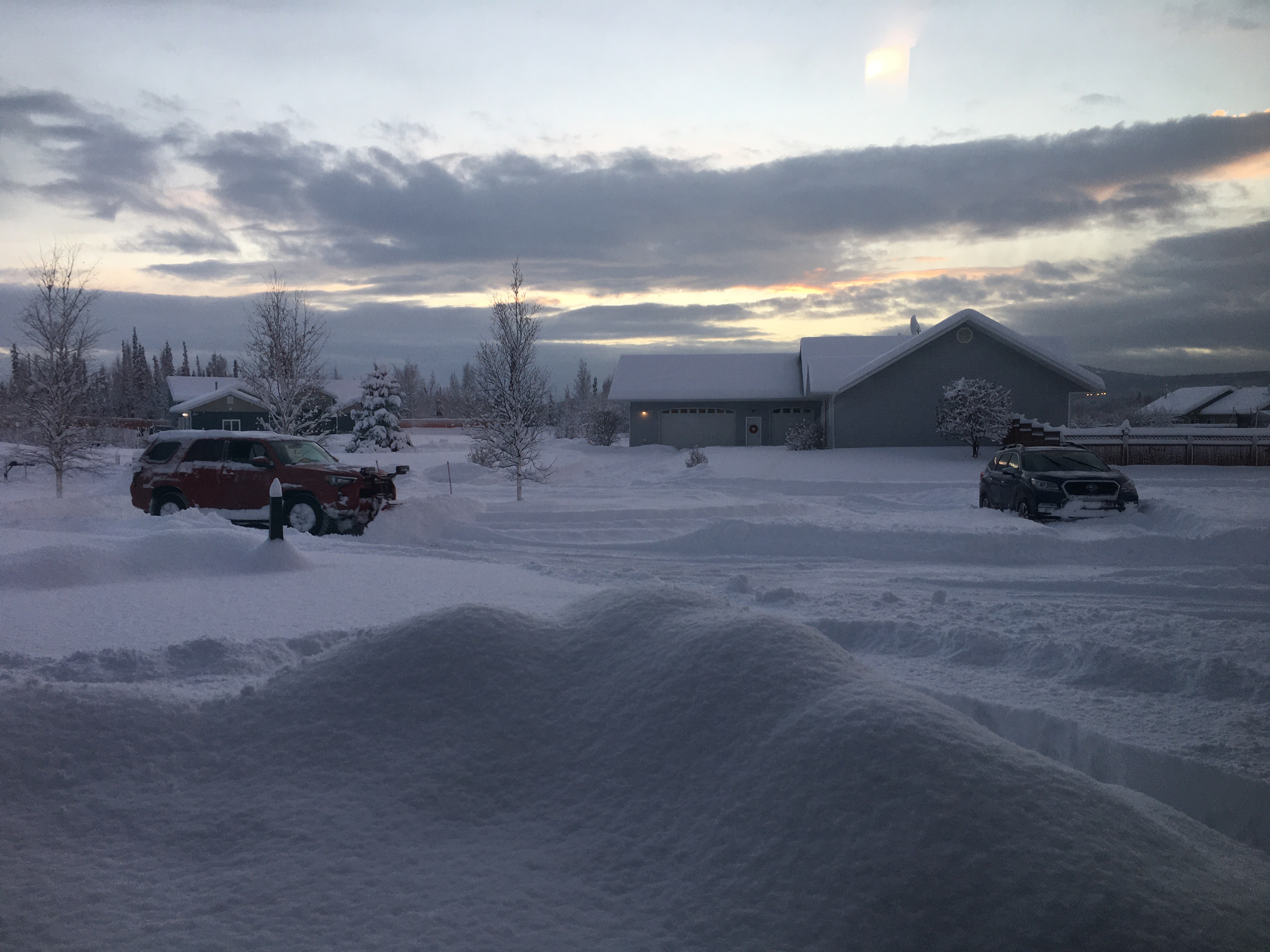 One of our sweet neighbors came along with his snowplow truck and helped push the bulk of it off the driveway. That helped.

Mars used the snowblower to clear the snow next the car. But he still couldn’t drive it in because I was high-centered on the snow. The drift I’d tried to drive through was higher than the axle (and my car has high clearance!).

He ended up having to shovel snow out from under my car before he could move it. It was a lot more work than he’d expected.

In hindsight, I should have just pulled into the driveway, where the neighbor had plowed, and not tried to make it through the berm to the garage. But it’s all good, and Mars doesn’t appear to be mad at me. Plus he gets brownie points for being my heroic knight and rescuing my car so it didn’t even have to spend one night outside. 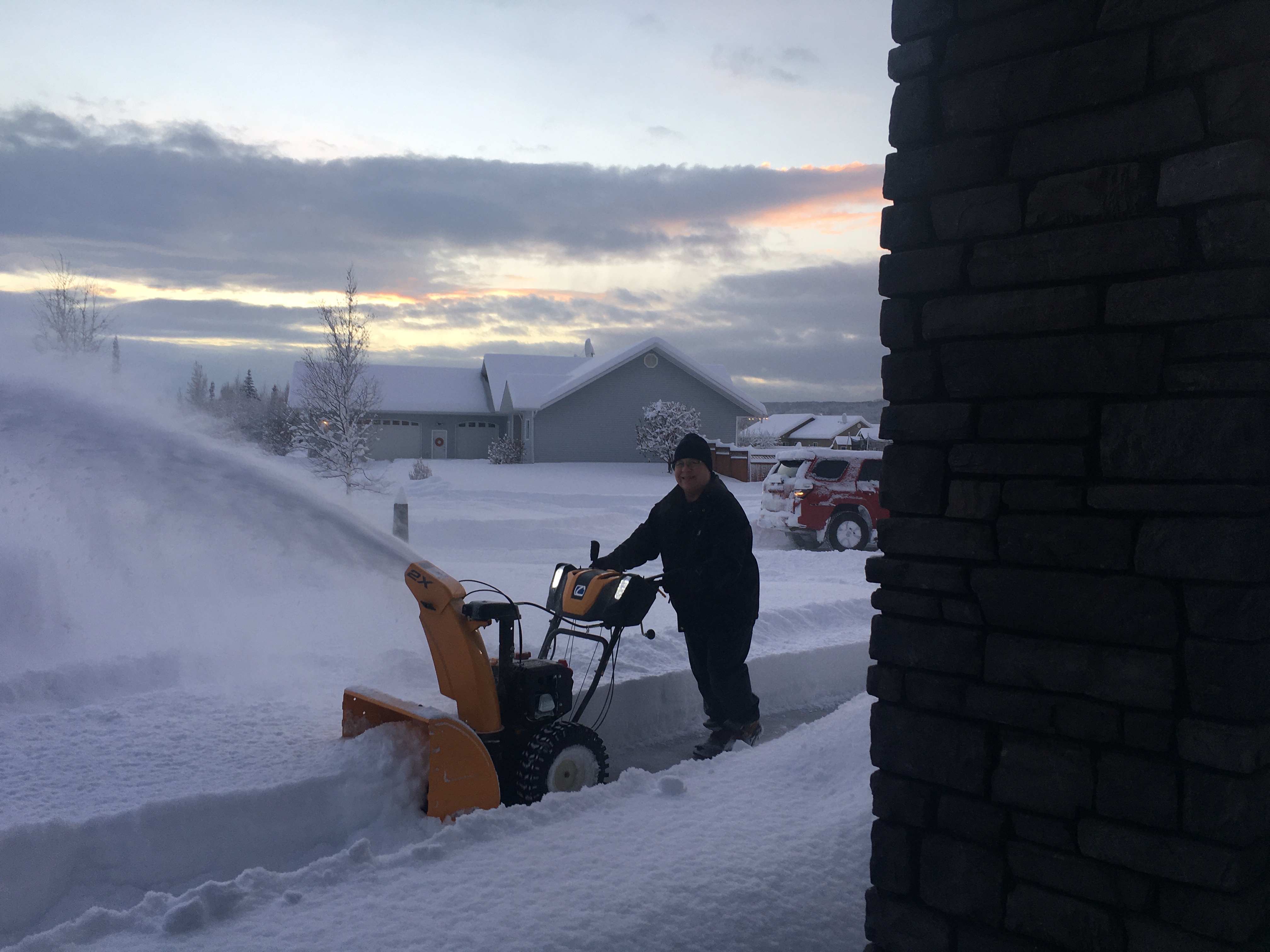 On that note, btw, a neighbor slid into the ditch this morning a few hundred yards down the street. She’s still there. The tow truck was unable to pull her out and finally gave up and left.

One last pic: this shows the accumulation on the front walk. What you need to realize is that The Animator shoveled the walk two days ago. That pile of snow Mars is removing is what fell today.

And now the electricity is out in our entire neighborhood. I’m finishing and posting this via my phone’s hot spot. Wish me luck!