No, I’m not talking a person who might have raped Mr. Schrödinger. Bear with me a bit.

I started playing the organ at church in May. After a ten-year hiatus, it takes a lot of practice, even in these days of reduced music due to Covid.

First thing every morning, I work on my fiction, and then I exercise, and stuff happens, and children and pets have appointments…blah blah blah.

Sometimes it’s evening by the time I get to the church. The secretary and pastor are gone, and I’m alone in the building. Our church is a bit isolated. It’s right off of a major road, but it’s surrounded by trees. I feel a bit vulnerable during the walk from my car to the door.

Last week, I went to the church to practice about 7:30 one evening. I was halfway up the walk when a car drove through the parking lot and stopped. The driver, a man in his late 30s or early 40s with a short, thick beard, opened his door and shouted, “Hey, is there (illegible word) tonight?”

I asked him to repeat it. Twice. I never did understand that word, but I finally said, “There’s nothing happening tonight. I’m just practicing the organ.”

He nodded and drove out of the parking lot, but he didn’t drive away. He idled on the side of the road by a row of mailboxes, just across the screen of trees that hide the church.

I went inside as fast as I could. My heart was racing, but I felt safe enough locked inside the church. I stayed for an hour or so and practiced.

When I was done, I headed to the front door (all glass), and saw that car turning into our parking lot. While I stood there, trying to decide whether or not to make a run for my car, he whipped a quick U-turn out of the parking lot and back onto the street. Maybe he saw me? I don’t know.

I backed away from the door, and went to a window with a better view. He had driven to the end of the church property and was sitting at the stop sign onto the main road. But instead of turning onto the street, he suddenly dropped into reverse and flew down the road backwards, past both of the entrances to our parking lot. Somewhere between an eighth and a quarter of a mile. After a couple of minutes, he came creeping forward again, barely moving, but this time, when he got to the stop sign, he turned left onto the road.

I scuttled out as fast as I could and went home. That was Tuesday.

Wednesday, I made a point of going to the church during the day when the secretary and pastor are there. As I pulled off the main road, I saw the bearded man’s car, idling by the mailboxes. As soon as he saw me, he put the car into gear and drove toward the stop sigh. Veeeerrrry slowly. As our vehicles passed one another, he turned fully to the side to see me, and again gave a very friendly wave. An overfriendly wave. Clearly he recognized me.

I told the secretary about him, and she said he has creeped out several women. One woman was working in the garden, and he walked out of the woods right up to her.

Thursday, I didn’t make it to the church in the daytime, so Mars went with me in the evening. The guy was parked in the back, and as soon as my car pulled into the lot, he drove over and parked next to the building. He got out and headed toward us.

I beelined for the door, leaving Mars to deal with the dog (who takes her sweet little time doing her business) and the danger stranger. But apparently the stranger turned around and went back to his car when Mars got out.

While I practiced the organ, the man drove his car forward and reverse, back and forth, behind ours. Mars finally called the pastor, who said he would speak to him.

Friday night, the stranger again was idling by the mailboxes when we pulled onto the street, and the moment he saw my car, he pulled out, drove to the stop sign, and turned left, away from the church.

But here’s the thing. The thing men need to understand.

In situations like this, when women express our apprehension, men often make fun of it. “I wasn’t going to hurt you,” they say (and I hear it with a sneer). “You are perfectly safe.”

But I do NOT know. Until the moment he either grabs me or leaves once and for all, I do not know if I am safe. 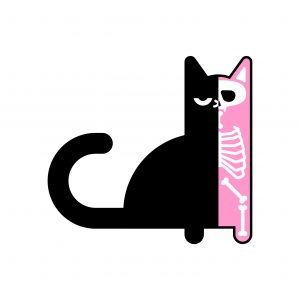 Schrödinger’s cat. Both alive and dead.

And because I do not know, I do not feel safe.

Like most (all?) American women, I’ve had a string of creepy experiences and assaults, so I pretty much assume any unfamiliar man who approaches me when I’m alone in an isolated place is a danger.

Whether or not I actually am safe is irrelevant. My fear is exactly the same whether he is stalking me with an intention to rape or is just a lonely man with zero nefarious intentions.

I was explaining all this to Mars, and he said, “So for that moment, before he either attacks or leaves, he both is and is not a rapist. At the same time.”

We both burst out laughing. From now on, whenever I get spooked by a strange man acting weird, I’m just going to call him that. Shrödinger’s rapist.