We’ve had a flock of Canada Geese hanging around the house this week, fattening up for the long flight south. I spend an inordinate amount of time just watching them. 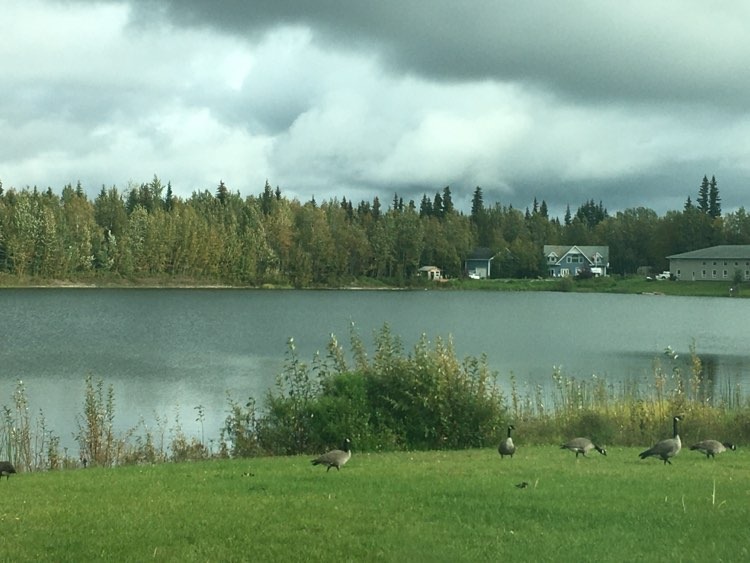 There seems to be one goose in charge. If they are swimming on the lake, and that one goose flaps his wings to fly away, they go en masse.

It looks instantaneous, like someone shouted, “Three … two … one … GO!”

But I’m sure there’s some message I don’t pick up.

Occasionally one of the other geese will try to get the group to leave. He will furiously flap his wings, like he’s struggling to achieve lift-off, but the others ignore him. So he’ll settle down and go back to placidly floating, or whatever it is they do on the water.

I suspect he’s trying to build his resume, so to speak. Move up just a hair up in the pecking order, in the hopes of eventually becoming the King Goose the flock will follow.

On land, they always have one goose on guard. The flock will be head down, searching for food in the grass, but one goose on the edge of group will be standing up tall, his head continually pivoting from one side to other. You can see him on the right in the picture. I assume they take turns keeping watch, so everyone gets a chance to eat.

If anything threatening comes near the flock, this goose with run toward the threat. He will stretch up to his tallest and flap his wings at the intruder (it’s seriously intimidating even to humans when they do that!). The message is clear: get the hell away!

Sometimes the threatening stranger is another goose. The flock is often a pretty cohesive group. On the lake, it’s a flotilla. On the ground, the birds will scatter some, looking for food, but there’s often a group with a clear delineation between “us” and “them.”

On the outside of the group, there are usually a few stragglers. They follow the group, but they never quite join the flock. And they don’t eat peacefully with their head down, like most of the flock. They’ll grab a bite, look all around, then grab another.

From my perspective, it’s funny. How can there be dividing lines between one goose and another? They’re all Canada Geese. They all look the same to me.

I wonder if sometimes the geese look at us with the same bemusement.

“How can there be dividing lines between one human and another? They’re all homo sapiens. They all look to same to me.”