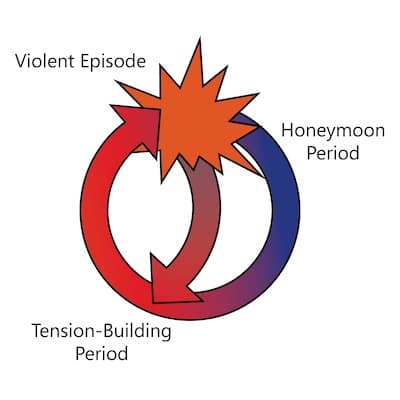 You’re here, so you probably suspect you are a victim of domestic abuse.

Abuse is so misunderstood. There are many myths about abuse, the worst and most insidious of which is that it isn’t abuse if it isn’t violent.

Here are some truths you need to understand.

First, the thing that makes abuse so powerful is the cycle of abuse. Abuse occurs in a very predictable cycle, and that’s what gives the batterer so much power.

First, there’s a Honeymoon Period. Remember when you first met? He was so attentive and sweet. Any girl would have fallen for him! That’s the honeymoon.

Unfortunately, it doesn’t last. It’s followed by a period of Tension-Building.

Tension-building starts small, but like the proverbial frog in boiling water, by the time you realize you’re not gonna survive, it’s too late.

It can start with little digs — criticism that could almost feel constructive. Almost. Or jokes that hurt (“But I’m just kidding, honey! You know that!”).

The Tension-Building Period can be debilitating. If you hear enough times how ___________ you are (fill in the blank: lazy, stupid, promiscuous, ugly, fat, insane, incompetent, worthless, etc.), you eventually start to believe it.

Tension-Building can go on for years.

Eventually, however, the pressure is too much for the batterer, and he snaps with a Violent Episode.

Violent Episodes are easy to recognize. Everybody agrees it’s abuse when a man punches his wife in the face, and she’s in the hospital with a wired jaw. Lots of women leave the relationship after a Violent Episode.

The problem is … and this is why victims remain in or even return to abusive relationships … the Violent Episode is followed immediately by another Honeymoon Period.

Picture the cycle from a victim’s perspective. This amazing guy, this guy you were so lucky to attract, has begun to realize you aren’t Cinderella. But he’s still there.

Granted, he talks about all the little characteristics you’re ashamed of and tells you how awful you are — and how lucky you are to have him (and boy, do you know it!) — but he’s still there. That’s not nothing, especially since you’re obviously garbage, and he’s so fantastic.

Then he hits you. Even you — beaten down as you are — even you know you do not deserve that! So you leave. You dump that son-of-a-bitch on his sleaze-ball ass!

But he’s so very sorry. He swears he’ll never do it again. He’s become the amazing man you met initially, and he’s treating you like the most wonderful woman alive. You’re so very raw and broken, and he’s so attentive and remorseful.

And it seems sincere. He’s not playing you, you are sure of it! (This might even be true.)

How could you possibly leave now? And why would you?

But then the Tension-Building begins again. It begins in the most innocuous of ways, and you don’t even notice at first — until suddenly the water is boiling, but you’re once again too broken to jump out of the pot.

Then he hits you again, and you leave. Again.

This cycle repeats again and again. The average abuse victim will leave her batterer seven times before she makes it permanent because the Honeymoon Period is so powerfully attractive.

At first, the Honeymoon Period can be long — as long as several years — but it gets shorter and shorter. Eventually, the batterer can go straight from a Violent Episode into Tension-Building without a break.

The main point to remember is that the Honeymoon Period will always eventually be followed by another Violent Episode, and the violence will escalate. Regardless how safe you may feel now, the day will come when your very life feels endangered.

You may be hesitant to call your experience abuse if you’ve never had to seek medical care, especially since he’s insisting it’s not abuse.

First, there are some actions that define abuse even if they only happen once. If your significant other has ever hit you or a previous wife or girlfriend, he IS abusive. Period.

Ditto if he has shoved or choked you, forced you to have sex, purposefully broken your possessions to hurt you, or threatened to kidnap your children.

Second, there are lots of types of abuse that are not physical, and they can be just as damaging. A single event of, say, criticism during an argument does not constitute abuse. A continuous barrage of belittling and shaming, however, does signal abuse.

Third, be aware of red flags. If your partner is extremely jealous or chauvinistic, he might be abusive, but there are men who are both without the abuse. The primary difference is control. Abusive men feel the need to control their partner, and they will go to long lengths to keep her under their control.

If you suspect you may be in an abusive relationship, go through this interactive online tool. Or this checklist or this one. Here’s another specifically targeting emotional/psychological assault (as opposed to physical assault).

Why Should I Get Help?

The biggest reason is because you are in danger.

Yes, you are. Even if he’s never physically hurt you, abuse tends to escalate. By the time you recognize your danger, it will be much, much harder to escape. And even non-violent, emotional abuse can create long-term physiological problems that put your health at risk.

But you also deserve better than this. You are not what he describes, and you deserve to be with someone who will help you see your best self. You deserve to have kindness and love.

You deserve to feel safe.

How Can I Fix the Relationship?

You absolutely cannot control his actions. I know you’ve been trying. You’re probably walking on eggshells, trying to avoid saying or doing anything that will upset him.

But it won’t work. No matter how hard you try, he’s going to get angry with you and lash out.

The only person who can change his behavior is him.

And as long as he can control you, he will not be motivated to change. If you leave, he will … but the odds are overwhelming that no matter how long you stay gone, he’ll revert once you return because the motivation will be gone.

If you are absolutely determined to remain in the relationship, you can try counseling, to learn how to avoid being sucked into his drama. Be sure you choose a counselor who has experience with abuse victims.

But be aware: the only real choice you have is to remain an abuse victim or to leave the relationship.

What Should I Do?

First, get help and support. Call the National Domestic Violence Hotline. And contact your local women’s shelter. If you don’t know how to find it, start here.

You need to understand this: If you do not get therapy, you will choose one abusive relationship after another until you die.

Yes, I’m sorry, but it’s true. You need to understand why you keep choosing these men, and you need to learn how to recognize abuse before you’re sucked into the cycle again.

No, it is emphatically NOT your fault that you are abused. He is choosing to hurt you. But you also do not have the skills you need to protect yourself, and you probably will not be able to find them on your own.

Ask your local women’s shelter for a referral to a counselor who is familiar with abuse. Most have sliding scales if you cannot afford counseling.

Third, start planning your escape as early as possible, but be careful. The most dangerous time for an abused woman is when she tries to leave, so plan carefully and with the help of professionals.

Gather important documents and phone numbers, keep a spare set of car keys hidden from your partner, and begin to save money in a place your partner doesn’t know about. And document everything that happens by calling the police and getting medical help when appropriate.

The first and hardest step is to recognize yourself as a victim, but once that is done, you can begin building the life that you deserve.